Is the brain of fitter individuals different from that of less fit individuals? Yes, several investigations support that there are indeed important structural differences in the brain in people with different physical fitness levels.

As an example, a recent study conducted by our group in 100 overweight-obese children explored the whole brain and observed that the children with higher aerobic fitness (capacity of a person to do exercise for a long time and efficiently, also known as cardiorespiratory fitness) have higher volume in 9 cortical and subcortical brain regions relevant for cognition, executive function, and academic achievement [1]. In addition, we observed in a different study and group of children that aerobic fitness level was associated with the shapes of subcortical brain regions, showing therefore a link between physical fitness and brain morphology [2]. Similarly, other researchers have observed that hippocampus and dorsal striatum, key brain structures responsible for memory and other high cognitive functions, are markedly larger in fitter kids compared with less fit kids [3,4]. 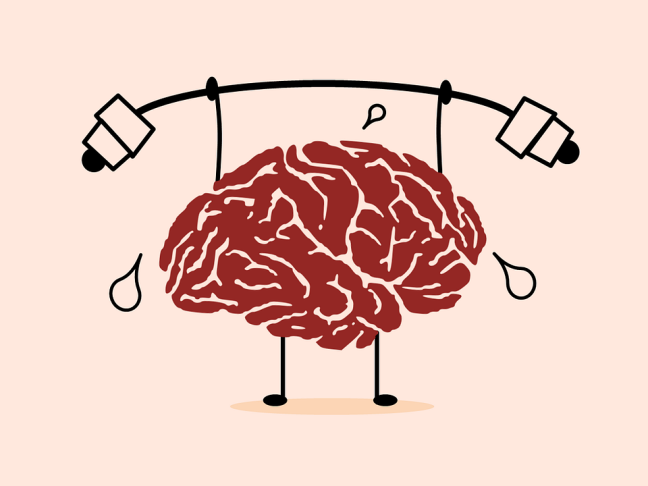 But differences in brain volumes according to physical fitness are not only observed in the growing brains of children, but also in adults and in older adults in which brain volume is known to shrink as a person ages. Several investigations have consistently shown that hippocampus volume is larger in fitter older adults than in their less fit peers [5]. However, even more important are the results of another study which demonstrated that 1 year of aerobic training in older adults did not only attenuate the natural decline in hippocampus volume observed in the control group that did not train, but did even successfully reverse the natural trend, increasing hippocampal volume by 2% and leading to improvements in memory function [6].

Collectively, existent evidence concisely supports that individuals with a better aerobic fitness level, have more developed certain regions of the brain, which in turn has shown to positively influence cognition. Therefore, there is emerging evidence suggesting that to exercise and be in a good fitness level is healthy not only for the body, but also for the brain and cognition. Thus, as stated in the title of a landmark review article in this topic [7]… “Be smart, exercise your heart”.

Health and fitness apps enable researchers, physicians, sport specialists and healthcare practitioners to maximize health and gather data from large numbers of people (Savage, 2015). Nowadays, the apps have the potential to reach nearly all populations, regardless of gender or ethnicity, even for those who have limited access to healthcare. Another remarkable point is that smartphones allow to perform assessments without be physically present on specific location.

Smartphones made to measure

In this context, several apps are being validated for obtaining data of sports performance and public health issues. In this context, The MyHeart Counts Cardiovascular Health Study is a very good example (McConnell et al., 2017). In this study physical activity was recorded through the motion coprocessor chip of the smartphone. The motion chip was able to include triaxial accelerometer, gyroscope, compass and barometer. Fitness was measured with the 6-minute walk test and final time was registered by the app. Sleep patterns were also registered by the motion chip. MyHeart Counts has demonstrated the feasibility, large-scale and real world assessment of physical activity, fitness and sleep using a smartphone in more than 40.000 people. Smartphones are definitely made to measure!

In fact, considering the importance reached by physical fitness as a powerful indicator not only of sport performance, but also and mainly as a maker of current and future health/disease, it is relevant to known about the currently available apps allowing assessment of the main health-related physical fitness components. An example is My Jump, which has been developed by Balsalobre-Fernandez, Glaister, & Lockey (2015) for measuring vertical jump height. Vertical jump is the most common field test to evaluate lower limb power in various populations and it has been recognized as an important tool to quantify neuromuscular fatigue.

In this sense, we have recently reviewed the apps for measuring the main health-related fitness components available in Google Play and App Store (unpublished material). Therefore, we have concluded some important points: 1- All validated apps conducted under research conditions have been developed for App Store; 2- Course-Navette field-test has been the most use for apps aiming to estimate aerobic capacity; 3- Regarding the muscular strength component most of the apps has been designed to calculate the maximum repetition; 4- Few apps are available to measure velocity and agility; 5- The flexibility category is the one that contains more scientifically validated apps.

If you are planning to use an app to measure your fitness, you should pay attention to the following recommendations:

Given the strong link between physical activity and health, the promotion of physical activity is a major goal internationally, regardless of income, gender or ethnicity. However, intervention programs are usually conducted on specific cities or locations, excluding many potentially interested people who live geographically too far or those that for whatever reason cannot be physically present on the intervention place.

Can smartphones help to solve this problem, so that any person living anywhere, can benefit from an exercise-based intervention program?

The answer is YES, there is a great potential for improving lifestyle through mobile phones, and particularly for increasing physical activity using smartphone technology (Fanning et al. 2012). Smartphone technology is useful to disseminate information about lifestyle modification (e.g. physical activity) to the general population and to populations at risk (Liu et al. 2015). Mobile phones are becoming an essential part of the lifestyle in the World as indicates the growing percentage of worldwide population owning a smartphone (higher than 45%) and the fact that smartphones are carried all throughout the day (Ganesan et al. 2016). There is nowadays a wide range of apps and wearable devices are excellent in engaging people into activities, and in measuring and influencing behaviours in real time (Bort-Roig et al. 2014).

It is well known that exercise has health benefits as a monotherapy or in combination in the treatment of depression and anxiety (Blumenthal et al. 2007, Dunn et al. 2005). In addition, exercise has also been shown to prevent or reduce weight gain and improve sleep (Sugaya et al. 2007, Youngstedt 2005). Although systematic studies on ADHD symptoms are still lacking, preliminary evidence suggests that exercise enhances the effect of medication, benefits multiple areas of ADHD dysfunction and does not provoke any adverse effects (Hoza et al. 2016). Exercise may be a prime intervention to target comorbidities of ADHD as obesity (closely related to low fitness, for more details read our post Low fitness and ADHD: An additional comorbidity?). Although it is widely described the benefit of exercise as an adjunctive therapy to ADHD, there is lack of research in the use of exercise as a sole intervention (Hoza et al. 2016).

Under the umbrella of the CoCA project, a pilot clinical trial based on an exercise m-health approach in ADHD young patients will provide new insights about the potential of smartphones to improve ADHD symptomatology and its comorbidities, such as obesity and depression.

It is well known that depression and obesity are comorbidities highly prevalent in ADHD patients (Cortese et al., 2016; Michielsen et al., 2013). Given that obesity and depression are closely related with a lower physical fitness level, it is reasonable to think that a poor physical fitness could potentially be a novel, less studied, comorbidity associated with ADHD.

Physical fitness is a set of attributes related to a person’s ability to perform physical activities that require aerobic fitness, endurance, strength or flexibility and and also makes reference to a full range of psychological qualities (Ortega, Ruiz, Castillo, & Sjöström, 2008). Epidemiological studies have consistently demonstrated that being physically fit have a crucial role in overall health status. In fact, Ortega, Silventoinen, Tynelius, & Rasmussen (2012) observed in more than one million of Swedish adolescents than those who had low muscle strength had a higher risk of being diagnose with a psychiatric in the future disorder and to die due to suicide.

Information about physical fitness levels in ADHD patients compared with age-matched controls is scarce. Jeoung (2014) found that those university students with low muscular strength and muscular endurance were more likely to have ADHD than those with greater muscular strength and endurance. Children with ADHD had lower performance on aerobic capacity using a field shuttle run test (Verret, Gardiner, & Beliveau, 2010). Harvey & Reid (2003) indicated on their systematic review that children with ADHD are at risk for poor levels of physical fitness. In contrast, Golubović, Milutinović, & Golubović, (2014) found no differences on physical fitness among children with and without hyperactivity.

Although the information is limited, there seems to be emerging evidence suggesting that a low fitness level could be another comorbidity of ADHD, yet further study on this is warranted. CoCA project includes measures of cardiorespiratory fitness and muscular fitness, and will provide new and fresh data about the relationship of fitness with ADHD symptomatology and comorbidities. Waiting for the results of the CoCA project!