Recently, professor Stephen Faraone from SUNY Upstate University in the USA gave a webinar about genetic research in psychiatry (especially ADHD) and how this can help to better understand diagnosis and provide better treatment. In this blog I will share with you some highlights from this webinar.

ADHD is not something that you either have or don’t have. Rather, symptoms or characteristics of ADHD are present in the entire population, in varying severity. The system for psychiatric diagnoses is however based on categorical definitions that determine when a certain combination of symptoms and severity can be classified as a particular disorder. Although these categories can be of great help to provide public health data or determine insurance coverage, they often don’t really match individual cases. Hence there arise problems with heterogeneity, subtypes, subthreshold cases and comorbidity.

Genetic research has shown that psychiatric conditions such as ADHD are not caused by a few single genes, but rather by thousands or tens of thousands genetic variants that each contribute slightly to the ADHD risk. These so-called polygenic risk scores form a normal distribution across the entire population, with the majority of people having low polygenic risk scores (so a low to average risk of ADHD), while a small portion of individuals have a very low or very high risk. This adds to our understanding that ADHD is a continuous trait in the population.

2. Comorbidity in psychiatry is the norm, rather than the exception

In the webinar, Stephen Faraone explains that in 90’s it was thought impossible that an individual can have both ADHD and depression. Now, we know better than that. There are substantial genetic correlations between different psychiatric disorders, meaning that the genes that increase the risk of for instance ADHD, also increase the risk of schizophrenia, depression, bipolar disorder, autism and tic disorder. This is further evidence that psychiatric conditions are not separate, categorial entities but rather arise from similar biological mechanisms.

3. Personalised medicine and pharmacogenetics are not yet sufficiently established to adopt widely and replace current medication on a broad scale

The second part of the webinar was about pharmacogenetic testing. This means that an individual’s genetic profile is used to determine whether a drug will be effective, and in what dose. Although this sounds promising, there is still a lot of discussion about the validity of such tests. This is due to varying results, differing protocols and large heterogeneity between studies. In some cases, pharmacogenetic testing can help to find the right treatment for an individual, for instance when this person is not responding well to regular treatment, but it is definitely not a fool-proof method yet. Better randomized controlled clinical trials are needed to improve reliability of these tests.

You can watch the full webinar here: https://www.youtube.com/watch?v=DLgqdJWZKIo 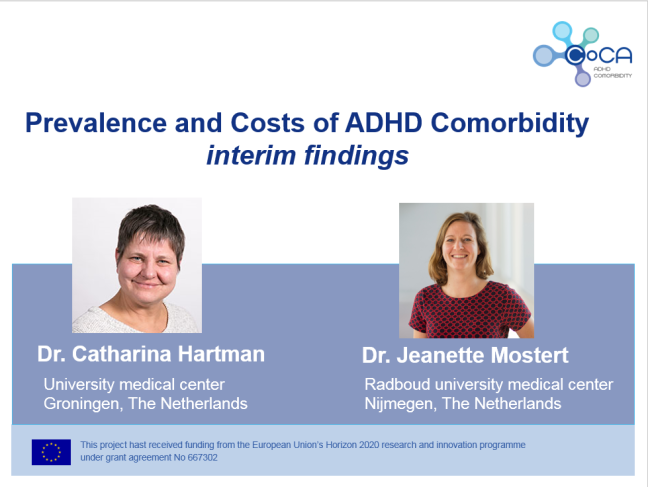 Do individuals with ADHD more often suffer from depression, anxiety, substance abuse or severe obesity, than individuals without ADHD? Are there differences between men and women in how often this is the case? Does having ADHD in addition to one of these conditions result in higher health care costs?

The short answers to these questions, are yes, yes and yes. In the CoCA-project, researchers have investigated these questions using very large datasets including Scandinavian birth registries that contain information of millions of people. This allows us to get a better understanding of how often conditions occor, how often they occur together, and how often they occur in men vs women. Furthermore, we have investigated health insurance data from Germany to study patterns of health care costs associated with ADHD and its comorbid conditions.

The interpretation of these data is however not simple. That is why we have recorded a webinar with dr. Catharina Hartman from Groningen, The Netherlands. She is the leader of these studies and can explain what these findings can and cannot tell us. The webinar ends with implications for policy makers and health care professionals, based on these findings.